This month’s BeZine is all about Theater. Come on over and have a look!

It’s dim, but not quite too dark to see where you’re going. Small bulbs cast just enough light to barely distinguish faces and furniture. The smells of cut lumber, wood oil and paint mingle with makeup and sometimes musty costumes, coming together in a heady miasma of nervous sweat and dreams of success. The dull rumble of the audience murmurs from the other side of the thick, velvet curtain. It immediately electrifies the air with expectations. The cast take their places, everything is set and the bulbs in back suddenly go out. The curtain opens, the lights and sounds come up, the watchers hush and…the show begins! 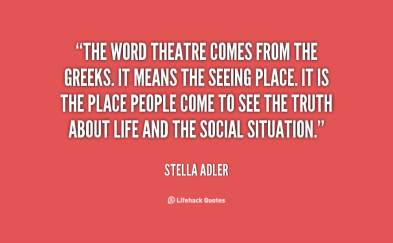 I come by my love of the stage honestly; my mom’s creativity and extensive acting experience in her college troupe of players translated to prize-winning Halloween costumes for me and my brother when we were kids. By the time I was twelve, we had been to see several local productions of shows like Annie, A Christmas Carol and The Music Man. In high school, I became stage manager for the drama club and even had a bit part in The Miracle Worker. I painted numerous sets, gel backgrounds for the lights and found a niche in the camaraderie of the actors and the long nights of set building and rehearsals, the productions and cast parties (and the inevitable “after”-cast-party parties!). The lessons I learned then have been carried with me throughout my life and helped shape me into a better person. 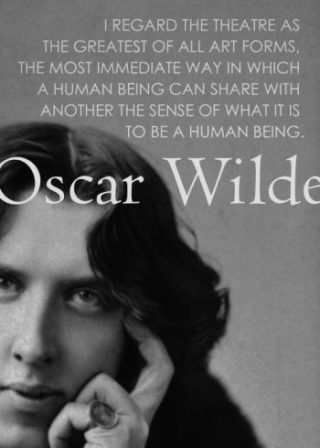 To an outsider, someone who has never experienced or been a part of the theater world, there might be a lack of understanding of why it’s important.  It’s a sad, unfortunate truth that when education budgets get tight, the Arts (including theater) programs are the first to be cut. So here are just a few reasons why theater in particular should be saved and considered vital to educational curricula everywhere:

* Theater courses build self-confidence. I’d hazard a guess and say that most people don’t like public speaking. They get jitters, get nervous, have panic or anxiety attacks because they’re afraid they will mess up and people will laugh or judge. However, it becomes a lot easier when you can take on a persona, or be “someone else” up in front of people, who won’t recognize you because of costumes, makeup or a different voice.  It helps to take the pressure off, because if you mess up as a “character”, well, it’s not really you, is it? So it doesn’t matter as much. When you’ve succeeded “in character” once, it gets easier to do it again the next time. Success builds on itself, and so does self-confidence. Kids who are exposed to drama classes early in life learn to believe in their abilities (even when they’re nervous or anxious) and this can mean they become adult leaders in the boardroom, or the main presenter in the marketing meeting.

* Theater improves memory, speech and listening skills. Students of the dramatic arts are taught several, key things that they need in order to do well on stage. Of course memory gets exercised by repeatedly learning lines and movements, or keeping track of various props in different scenes. Whether it’s breathing techniques to steady nerves, voice projection to speak from the diaphragm or listening closely for a certain sound, a “cue” (spoken or otherwise), these are all things that students routinely practice to become good at the craft. It also means that they can use these skills off-stage and in other real-life situations.

* Theater challenges imagination and creativity, promotes quick-thinking. I can’t tell you how many times I have seen actors flub or drop lines! The best of them immediately improvised and somehow made it to the next cue without missing a beat. The worst of them froze until another cast member covered for them somehow (via speech or actions) and got them back on track. There are definitely times in drama class and on stage when you have to be able to think on your feet, and I’m sure there are dozens of real-life areas where this ability comes in handy.

* Theater fosters teamwork. In the end, it encourages everyone to work together as a team. From the director and cast all the way down to the stage hands, the set and design team, the lighting and sound crews, everyone has a part to play. On opening night, the production becomes this beautiful, polished creation born of the efforts of everyone involved. It becomes a shining example of the power of teamwork, and we all know how important that is in life.

From the Greeks all the way through today, it’s obvious that theater is indeed “the seeing place”. What you “see” in it depends on the lens with which you view it, and whether or not you’ve ever been exposed to it in life or developed an opinion about it. Sure, we can continue to cut drama courses from education, but why would anyone choose to? A life well-lived is about so much more than business, money or S.T.E.M. subjects. Those give us solidarity in society and enrich our minds. The Arts, including Theater, nourish our hearts and souls. And that, is just as important.

Regarding the blog name, Dragon’s Dreams ~ The name comes from my love-affairs with both Dragons and Dreams (capital Ds). It’s another extension of who I am, a facet for expression; a place and way to reach other like-minded, creative individuals. I post poetry and images that fascinate or move me, because that’s my favorite way to view the world. I post about things important to me and the world in which we live, try to champion extra important political, societal and environmental issues, etc. Sometimes I wax philosophical, because it’s also a place where I always seem to learn about myself, too, by interacting with some of the brightest minds, souls and hearts out there. It’s all about ‘connection(s)’ and I don’t mean “net-working” with people for personal gain, but rather, the expansion of the 4 L’s: Light, Love, Laughter, Learning.
View all posts by dragonkatet →
This entry was posted in Art, Arts and Humanities, Creativity, Education, Food For Thought, Inspiration, Life, The Arts, Theater, Uncategorized. Bookmark the permalink.

2 Responses to The seeing place…